The 19-year-old struck a memorable debut goal on Saturday, but his coach expects a teething period to follow for his new signing

By Kris Voakes at Old Trafford

Louis van Gaal has warned Manchester United fans not to expect too much from Anthony Martial in the wake of the French teenager’s goal-scoring debut against Liverpool.

The 19-year-old came off the bench to net a glorious late goal which sealed United’s 3-1 victory over Liverpool at Old Trafford.

But his manager was quick to temper expectations of the £36 million striker, insisting that players of his age cannot be relied upon to deliver the goods in every game.

“It was a fantastic goal, I can’t deny that. But he’s still 19-years-old,” Van Gaal told a post-match press conference.

“He has to adapt to a new culture and has to adapt to the Premier League. It was the right moment for a manager to introduce him as Liverpool needed a goal so he had space to work in. His finish was fantastic.”

“It will give him a boost of course, but you still cannot expect a player of that age to have consistency. You cannot ask that. You can ask that from Schweinsteiger and Carrick, but not players at 19, 20, 21. He will have ups and downs.”

After a slow start, United struck early in the second half through Daley Blind and an Ander Herrera penalty. Christian Benteke’s wonderful overhead kick brought Liverpool back into the game, only for Martial to wrap up the three points. 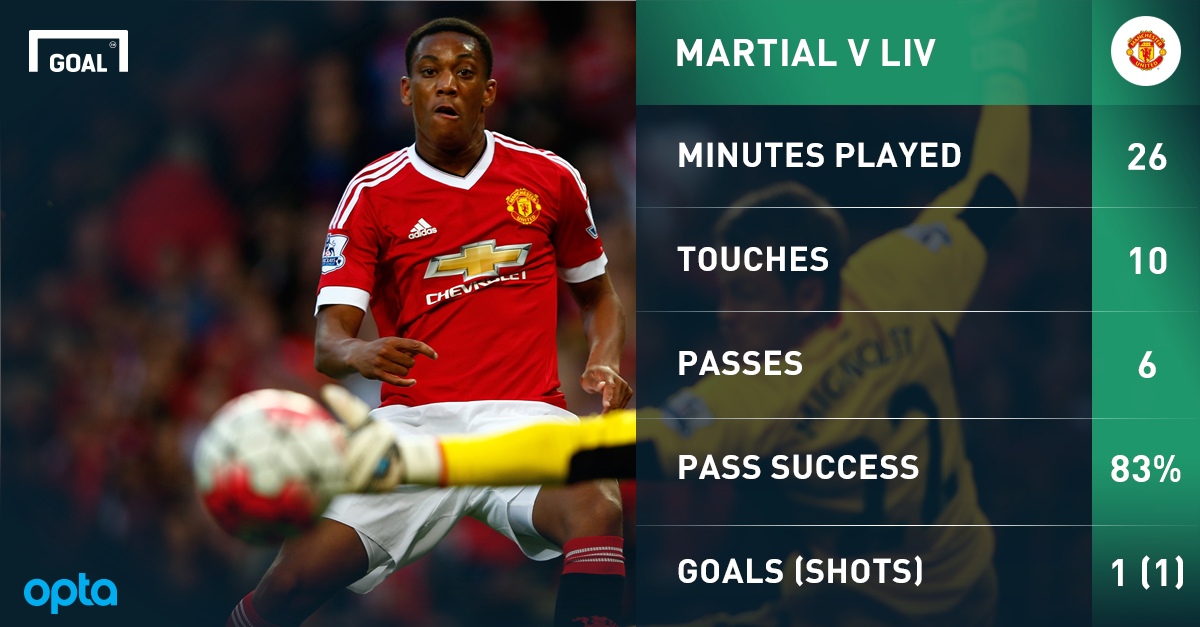 The Dutchman added that he was happy with the performance, despite his side not having a shot on target during an uninspiring opening 45 minutes.

“Our performance was good, we were in very high control of the match. The first goal was a well-studied goal so all the meetings and training sessions have worked, and Daley took it well. And that decided the game, but we have to kill the game and we didn’t do that,” he said.

“The throw-in off David De Gea started something and we have to avoid that. But the goal from Herrera was good, the pass from Michael Carrick was high quality. And then the young man, at 19, you have to be happy with that.”

The 3-1 win puts United in second place in the Premier League, but Van Gaal maintains his sights are set higher.

“I think, in a difficult period like we had in the transfer period with players coming and going, we always were considered worse than other clubs and we have noticed that. We have done very well, we have 10 points from five matches and only one club has better.

“Our aim is to be the best, but we are five points behind Manchester City and we still look to be in that position.”

The former Netherlands boss added that skipper Wayne Rooney, who missed the game with a suspected hamstring strain, will not be rushed back to fitness and will likely miss the Champions League visit to PSV on Tuesday.

“I don’t want to take any risks with our captain, he is too important to our team. So I don’t think he will play against PSV. I think he will be back for Southampton.”