Robins later scored again in the semi final against Oldham, netting in the 114th minute of an extra-time replay. United needed another replay in the final against Crystal Palace, with Lee Martin eventually scoring the only goal after an initial 3-3 draw. These were the fine margins.

“…grave doubts would have been raised about my suitability for the job,” Ferguson wrote in his 2013 autobiography as he contemplated what might have happened without that FA Cup. “We will never know how close I was to being sacked, because the decision was never forced on the United board. But without that triumph at Wembley, the crowds would have shrivelled. Disaffection might have swept the club,” he added.

Certainly, had United dispensed with Ferguson at the end of or even during the 1989/90 season – a campaign in which the club recorded its lowest league finish (13th) since relegation in 1974 – few might have considered it noteworthy. He would, after all, have been simply the latest in a growing list of managers to have fallen short of replicating the achievements of Sir Matt Busby.

By the time Ferguson was appointed in November 1986, United had failed to win a league title in 19 years, not since the days of Busby, Bobby Charlton, Denis Law and George Best.

United had enjoyed some highs since returning from the Second Division in 1975. Tommy Docherty and Ron Atkinson delivered FA Cup successes in 1977, 1983 and 1985, while the club had finished second in the First Division table in 1979/80 under Dave Sexton. Atkinson would then oversee third, third, fourth, fourth and fourth place finishes prior to his exit in 1986. But United were badly struggling when Ferguson moved south of the border from Scotland, 19th out of 22 in the First Division and flirting with relegation after taking 13 points from 13 games.

After a modest playing career that peaked during two seasons with Rangers in the 1960s, Ferguson began his managerial journey at East Stirlingshire and then St. Mirren, before landing the Aberdeen job in 1978. It was his record at Pittodrie that would bring him to United’s attention after remarkably winning three Scottish titles, four Scottish Cups and the European Cup Winners’ Cup, beating Real Madrid in a famous final in 1983.

To highlight the scale of his success, no Scottish club other than Celtic or Rangers were champions of Scotland in the 15 years prior to Ferguson, or have been in the 34 years since.

Ferguson did have an immediate impact at Old Trafford. In that first season his United side recovered enough to finish 11th in the final table. The following year, Brian McClair, one of his first signings, starred as the club finished second behind only champions Liverpool.

He wanted to make changes at Old Trafford by eradicating the infamous drinking culture and improving fitness and discipline. That included the departures of Norman Whiteside and Paul McGrath in 1989 following a setback 11th place finish. The year after, the FA Cup bought Ferguson some much needed time because his true impact was about to be felt. United had turned to youth football at the club’s lowest ebb in the 1930s, scouting and developing young talents. It had given Busby the basis of his first great United team between 1947 and 1952 and was the system that later produced the ‘Busby Babes’ and the club’s 1968 European Cup winners.

That had been somewhat lost and neglected in the years after Busby, but Ferguson resurrected the culture of youth at United in a big way. He remarked in his 2013 autobiography that had the board been preparing to sack him in 1990, then Bobby Charlton would have opposed it, for the United legend was well aware of the work going on behind the scenes to restore the youth setup to its former glory, and the ‘graft’ Ferguson was putting in ‘reforming the football operation’.

Ferguson was not revered as a great coach, but he was a manager in the truest sense of the word. 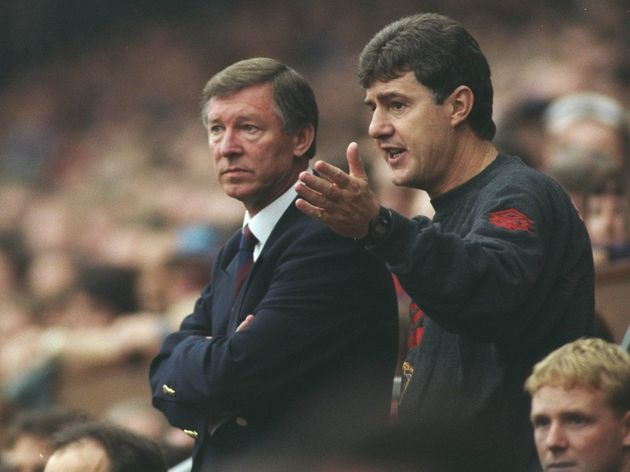 Ferguson took an active role in recruiting talents like Ryan Giggs, David Beckham, Paul Scholes, Nicky Butt and Gary Neville, the ‘Class of ‘92’. But it was Harrison who schooled them in the United way daily and ultimately moulded them into professional players who would win it all. In later years the system yielded first teamers Wes Brown, John O’Shea and Darren Fletcher, a trio of invaluable servants who made a combined 1,097 appearances for the club.

He also played the transfer market masterfully. Denis Irwin and Peter Schmeichel joined for a total of £1.1m in 1990 and 1991 respectively, playing 927 games for the club. He wasn’t afraid to spend big when it was warranted either, paying British record fees for Gary Pallister, Roy Keane, Andrew Cole, Ruud van Nistelrooy and Rio Ferdinand over the years.

Where Keane was concerned, Ferguson stole the £3.75m signing from under the nose of Blackburn in 1993 after opposite number Kenny Dalglish opted to leave the final paperwork until Monday after agreeing the deal on a Friday. The United boss got wind of this and signed Keane on the Saturday. His personal touch in such matters, whether it be signing the most expensive player in British football history or recruiting a 15-year-old on a YTS contract, was always key. When Ferguson landed Eric Cantona from Leeds in 1992 he had skilfully turned an enquiry about Denis Irwin into arguably the single most important buy of his managerial career. Cantona was the catalyst that brought United the inaugural Premier League title in 1992/93, as well as the two domestic doubles that followed. But his role as a mentor to the young talents emerging beneath him was just as crucial and helped secure ongoing success for another 15 years.

Arguably Ferguson’s greatest quality as a manager was knowing how to manage individuals in order to the best out of them. With Cantona, it wasn’t tough love or strict rules that did the trick, but free rein for the mercurial forward to do as he pleased. His man management saw so many players thrive and reach heights they simply never would have under anyone else.

The Scot was always in control and it was ability to rebuild that gave him his unrivalled longevity. He built three greats teams at United – the dominant mid 90’s side, the treble winners and the 2008 European champions, as well as several other good title winning ones in between, crucially always able and hungry enough to start again with a new project at the end of each cycle.

So much has already been said and written about his sheer number of trophies. But from the moment United captain Bryan Robson lifted the FA Cup in May 1990, the 23 years that followed rewrote football history. There is no other way to adequately describe such achievements. The elusive first league title, ending a 26-year drought, came in 1992/93, the first of 13. At that time, Liverpool were far and away the most successful club in English football with 18 league titles. But Ferguson’s United’s claimed a record breaking 19th in 2010/11 after close to two decades of extraordinary dominance, pushing the tally to 20 in the legendary manager’s final season before retirement in 2012/13. Five FA Cups in total, four League Cups, two Champions League titles, the UEFA Cup Winners’ Cup, the Intercontinental Cup and FIFA Club World Cup made for an astonishing 27 trophies in 23 years from 1990 onward.

Sir Alex Ferguson, a serial winner, the like of whom will never be seen again.

Number 48: Claudio Ranieri: A Ridiculed Tinkerman Who Masterminded One of Football’s Greatest Ever Achievements

Number 42: Massimiliano Allegri: The Masterful Tactician Who Won Serie A Five Times in a Row

Number 40: Luis Aragones: Spain’s Most Important Manager, the Atleti Rock and the Modern Father of Tiki-Taka

Number 39: Herbert Chapman: One of Football’s Great Innovators & Mastermind Behind the ‘W-M’ Formation

Number 38: Carlos Alberto Parreira: The International Specialist Who Never Shied Away From a Challenge

Number 36: Viktor Maslov: Soviet Pioneer of the 4-4-2 & the Innovator of Pressing

Number 35: Rafa Benitez: The Conquerer of La Liga Who Masterminded That Comeback in Istanbul

Number 33: Luiz Felipe Scolari: How the Enigmatic ‘Big Phil’ Succeeded as Much as He Failed on the Big Stage

Number 32: Jupp Heynckes: The Legendary Manager Who Masterminded ‘the Greatest Bayern Side Ever’

Number 31: Vicente del Bosque: The Unluckiest Manager in the World Who Led Spain to Immortality

Number 30: Arsene Wenger: A Pioneering Who Became Invincible at Arsenal

Number 26: Jurgen Klopp: The Early Years at Mainz 05 Where He Sealed His ‘Greatest Achievement’

Number 24: Bela Guttmann: The Dance Instructor Who Changed Football Forever (and Managed…Just Everyone)

Number 23: Valeriy Lobanovskyi: The Scientist Who Dominated Football in the Soviet Union

Number 21: Otto Rehhagel: The ‘King’ Who Turned 150/1 Greek Outsiders into Champions of Europe

Number 19: Bill Shankly: The Innovative Motivator Who Rebuilt Liverpool From the Ground Up

Number 18: Ottmar Hitzfeld: The Manager Who Won Absolutely Everything at Germany’s 2 Biggest Clubs

Number 17: Miguel Muñoz: The Man Who Told Alfredo Di Stefano to F*ck Off & Led the Ye-Ye’s to European Glory

Number 15: Brian Clough: He Wasn’t the Best Manager in the Business, But He Was in the Top 1

Number 13: Carlo Ancelotti: Football’s Most Loveable Eyebrow in the Words of His Players

Number 10: Bob Paisley: The Understated Tactician Who Conquered All of Europe With Liverpool

Number 9: Jose Mourinho: The ‘Special One’ Who Shattered Records All Over Europe

Number 6: Johan Cruyff: The Visionary Who Became the Most Important Man in the History of Football

Number 5: Giovanni Trapattoni: A Career of 2 Halves That Defined the Golden Era of Calcio at Juventus

Number 4: Pep Guardiola: The Maverick Who Strolled to League Titles in Spain, Germany and England

Number 3: Rinus Michels: The Most Influential Manager There Ever Was & His Total Football Legacy

Number 2: ​Arrigo Sacchi: The Game That Made the AC Milan Legend One of the Greatest Managers of All Time