The Portugal forward was just one of a number of stars to leave games early last week, but it should come as no surprise that top players are suffering, a specialist tells Goal

First, Gerard Pique left the Camp Nou pitch clutching his back, then Diego Costa and his strained thigh quickly followed. Within 24 hours, Marco Verratti and Zlatan Ibrahimovic were both early departees in Paris, while over in Madrid, Cristiano Ronaldo was forced into an early exit of his own.

Last week’s Champions League quarter-final first-leg clashes resulted in a huge number of worrying injuries to some of the world’s most notable players. While Pique’s back problem came as a result of a jarring fall, all of the others could well be traced back to the sheer exertion and demands of modern football.

Radamel Falcao is currently experiencing a race against time to be fit for this summer’s World Cup, and others have already been ruled out – Belgium’s Christian Benteke being the most recent case – as the phenomenal rate of injury issues only seems to have increased over the last 12 months.

Ronaldo’s case is particularly notable, with the 29-year-old having already racked up 4,169 minutes of football in 53 games since last August. With six La Liga fixtures, a Copa del Rey final, a possible four further Champions League dates and up to seven matches to play for Portugal at the World Cup, the Real Madrid man could end up playing 71 games this season. All this despite him having missed three games through suspension after being shown the red card while playing for the Blancos at Athletic Bilbao.

If Ronaldo succeeds in taking Madrid to the Champions League final and Portugal to the last four of the World Cup, he will bring his tally over the last three seasons to a sensational 198 games. So perhaps it is no wonder that the €94 million star picks up the occasional injury. 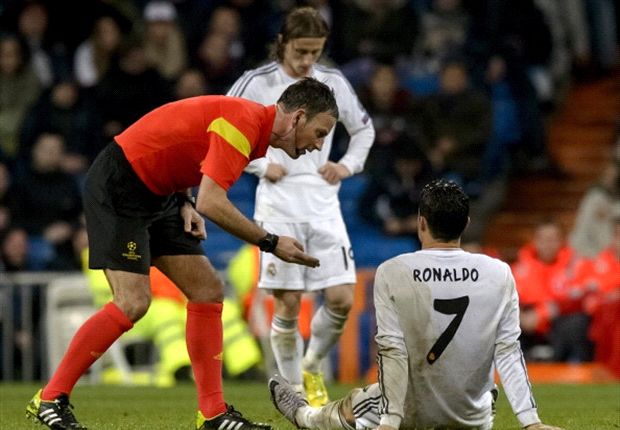 What is telling about Ronaldo’s recent trouble, though, is the fact his patellar tendon issue had been identified by Spanish media in the days leading up to the clash with Borussia Dortmund as a niggling injury he picked up in the dead rubber against Schalke two weeks prior to the quarter-final opener.

“It’s a slight knee problem but I’m not worried about it,” Carlo Ancelotti insisted after the game. Ronaldo missed the weekend win at Real Sociedad and is likely sit out of the clash with Dortmund on Tuesday night after hobbling out of training on Monday.

John Hardy, a renowned Consultant Specialist in Orthopaedic and Trauma Surgery at Spire Bristol, believes that such injuries can be alleviated by better management of initial minor ailments.

“Ronaldo is currently carrying a small injury that may well become a large injury if it is played on and ignored,” Hardy explained to Goal. “You see this all the time, with Rafael Nadal in tennis being a great example. He has been carrying knee injuries that have been badly managed for years and years, and I think that has limited his success.

“Players who are allowed to go through their full rehab programme without their coaches being involved until they are absolutely 100 per cent will have a much more successful club. It is about the team, not the individual in those circumstances.

“If you keep putting these players under pressure to play, it’s going to affect the team, not just the individual. More and more clubs seem to be becoming more successful once they get their medical management under control and successfully organise their rehab programmes.”

Ronaldo is well known for being averse to the idea of missing any competitive fixtures and also doesn’t take kindly to being substituted, but the Blancos ace could be putting his body at risk of sustaining a major injury as a result, explains Hardy.

“There is a direct correlation between workload and overuse injury, whether it be in bone muscle tendon or ligament,” he states. “After cyclic loading of any tissue there is micro trauma. The body needs time to heal these micro traumas. The commonest injury I see is a torn ligamentum mucosum. This leads to impingement of soft tissue in the knee. With time the soft tissue being pinched becomes hard and causes pain. The pain limits function and results in other injuries like Meniscal and ACL tears.

“By dealing with minor injuries, you’re preventing these major ACL ruptures and such from coming along, and you make that player much more successful. It is much better to prevent a minor injury than it ever is to treat a major injury.”

The case of fellow multiple Ballon d’Or winner Lionel Messi lends some context to Ronaldo’s current issues, with more than 170 games over three seasons preceding a series of muscle strains during 2013. And these are not the only ones putting their bodies through such rigours, with Ibrahimovic having registered 162 appearances since the summer of 2011.

With more games comes more risk, and if clubs choose to put their star men out on the field at all costs, then scenes like those in the Champions League last week could become ever more prevalent. The worrying trend may only pick up pace from here.