The Armenia international put the tie to bed with his first-half strike, though his game was cut short soon after, while Eric Bailly was booked twice

Manchester United cruised into the last 16 of the Europa League as a 1-0 victory at Saint-Etienne crowned a dominant 4-0 aggregate triumph, but match-winner Henrikh Mkhitaryan left boss Jose Mourinho with an injury worry.

The sight of the Armenia captain – who continued his recent fine form with a smartly taken goal from Juan Mata’s cross – departing before the half hour with an apparent hamstring problem was far from welcome with Sunday’s EFL Cup final against Southampton on the horizon.

Mourinho’s scope for tactical substitutions with an eye on that Wembley date was further limited when centre-back Eric Bailly was booked for two fouls on Romain Hamouma in the space of three needlessly rash minutes in the second-half.

It means the Ivory Coast international will be suspended when United begin their last-16 tie and his manager will have been pleased to see the remaining action at a buoyant Stade Geoffroy-Guichard pass without incident.

In contrast to the raucous din made by the home support, United played with an easy control that meant there was little to report until they opened the scoring in the 16th minute.

Mata shuffled into space on the left to curl in a sumptuous centre, leaving Mkhitaryan to apply a pleasingly deft finish.

The former Borussia Dortmund star’s joy was short-lived however, as he made way for Marcus Rashford and headed straight down the tunnel within 10 minutes of his sixth goal this season.

Rashford and Mata saw a low cross from Ashley Young flash agonisingly beyond them as Saint-Etienne appeared ripe to be cut open whenever it suited Mourinho’s men to do so.

An ungainly challenge from United goalkeeper Sergio Romero to thwart Kevin Monnet-Paquet gave the hosts a little encouragement before the interval, with pride their only remaining concern. 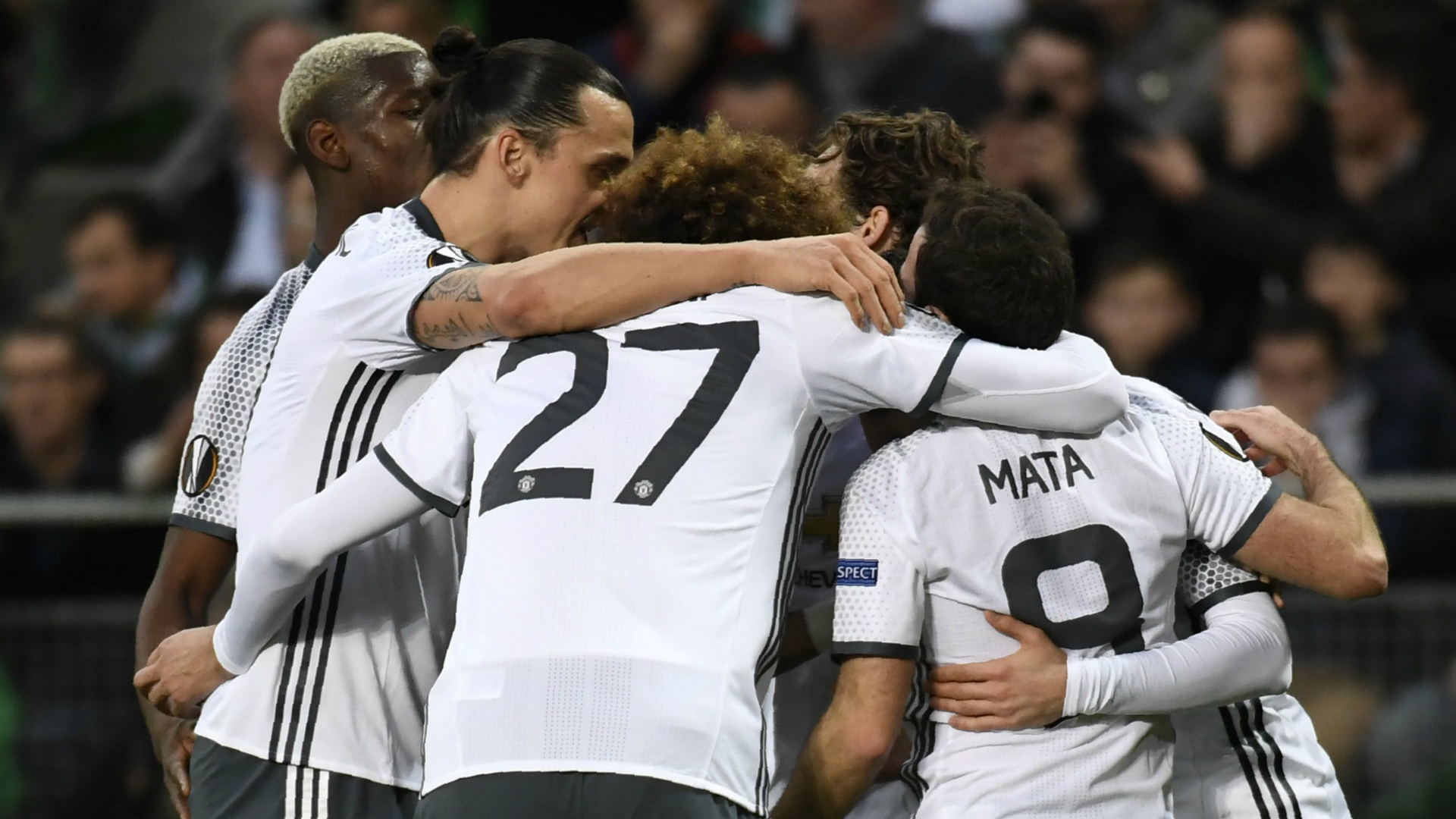 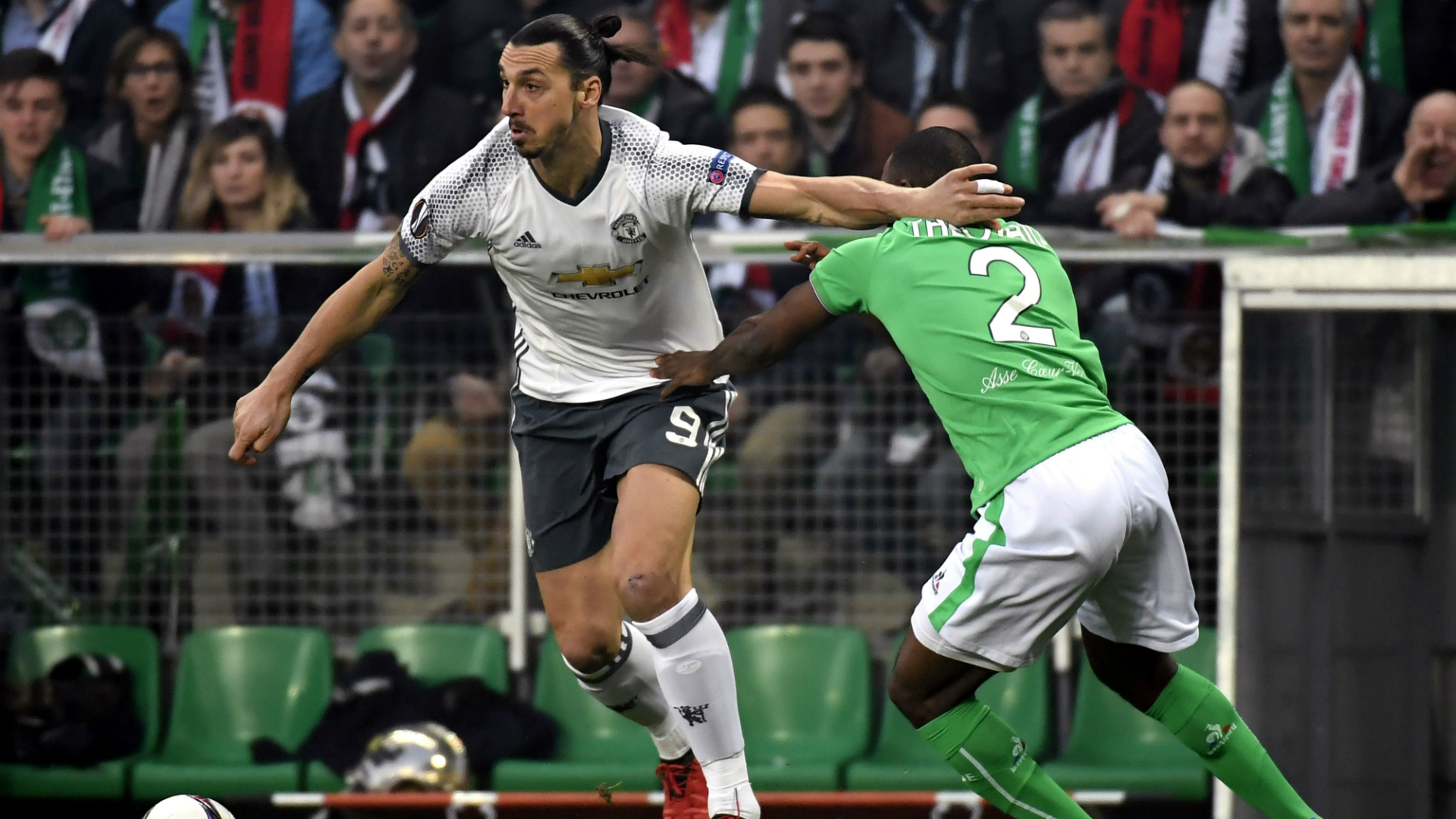 Daley Blind cut infield for United in the 58th minute, slipping a pass through for Marouane Fellaini to slam into the side-netting – an unmarked Zlatan Ibrahimovic inside was unimpressed.

Paul Pogba then drove into the arms of Saint-Etienne goalkeeper Stephane Ruffier and Mourinho’s star names remained in play as the hour passed, in spite of Mkhitaryan’s cautionary tale.

The likes of Ibrahimovic and Paul Pogba had to remain for the duration after Bailly’s indiscipline forced Mourinho to introduce Marcos Rojo in place of Mata.

Florentin Pogba stoked the dying embers of this battle for sibling supremacy when the Saint-Etienne left-back thudded an optimistic long-range shot wide, while his younger brother saw the ball run away from him when Rashford’s 75th-minute effort trickled across the six-yard box.

Family bragging rights had not been in doubt for some time by that stage.