Eden Hazard will head to the World Cup as one of the hottest young talents in football off the back of another season of progression.

Chelsea failed to win a trophy during the 2013-14 campaign, but the Belgian scored 14 league goals, improving on his previous tally, notched seven assists and won the PFA Young Player of the Year award.

And with Belgium back at international football’s top table in Brazil this summer, the forward could attract yet more admirers.

Hazard has the likes of Lionel Messi and Cristiano Ronaldo in his sights. That is the level the Belgian aspires to; he wants to win the Ballon d’Or.

Chelsea boss Mourinho believes Hazard can match the Barcelona and Real Madrid superstars, too. The Portuguese has described the playmaker as the best young player in the world, who can reach those heights if he is shown patience and given time by supporters and the media.

But it hasn’t always been overtures for the forward this season. There can be no defensive passengers in a Chelsea side coached by The Special One, and Hazard has been asked at times this season to act as a foil for his full-back, while also delivering the killer blow in the final third. 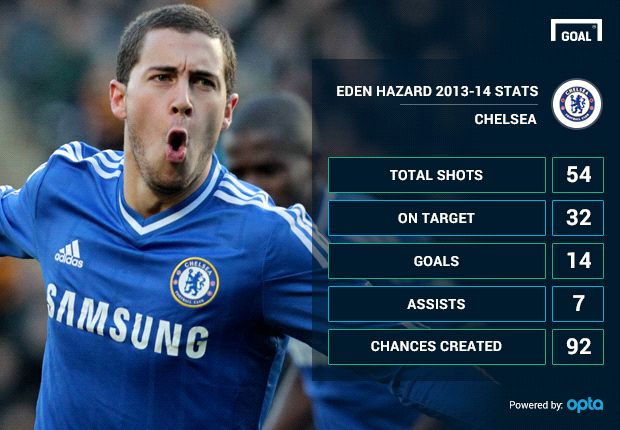 “Chelsea are not made to play football,” a frustrated Hazard said after the Blues crashed out of the Champions League to Atletico Madrid. “We’re good on the counter, a little bit like Real against Bayern.

He added: “Often, I’m asked to do it all by myself and it’s not easy. It was a complicated game. It will be a lesson for us regarding next year.”

Never one to shy away from a public debate, Mourinho responded.

“Eden is the kind of player that is not so mentally ready to look back to his left-back and live his life for him,” he told reporters.

“If you see the first goal of Atletico you completely understand where the mistake was and why we conceded that goal. The perfect team at the top level can’t make these mistakes.

“He’s not the kind of player ready to sacrifice himself 100 per cent for the team. No, I’m not happy [with his defensive performance]. I speak to him all season and I’ve been trying to improve him all season.”

Hazard found himself on the bench for the following game as Norwich visited Stamford Bridge, but was introduced at half time as the Canaries held the hosts.

The Belgian was the best player on the pitch in the second half but could not find a way past a stubborn Norwich side. Chelsea’s outside chance of winning the Premier League was killed off with a game to spare in unlikely circumstances.

While the prospect of Hazard leaving Chelsea remains an unlikely one, his frustrations are evident enough. Very few players have won the Ballon d’Or due to their defensive qualities, after all.

The Portuguese, meanwhile, will want to see defensive improvements during pre-season from Chelsea’s Player of the Year. If he doesn’t, the sale of Juan Mata – who won the same award in both 2012 and 2013 – has set a precedent to suggest nobody is safe from the chop.

Hazard will have plenty of admirers after the World Cup, but very few realistic suitors. Chief among them, though, would be Paris Saint-Germain.

The French giants have monitored a number of Chelsea players over the course of the 2013-14 season. Laurent Blanc recently admitted an interest in both Oscar and David Luiz, while club president Nasser Al-Khelaifi, former Lille team-mate Yohan Cabaye and Thiago Silva have all revealed their admiration for Hazard over recent months.

Al-Khelaifi also recently suggested PSG had the chance to sign Hazard in 2012 but opted against disrupting advanced negotiations between Lille and Chelsea in order to maintain a good relationship between the two clubs.

And Hazard himself has said, perhaps jokingly, that he would have to take a move to PSG into account if his wife pushed for a return to France.

Of course, PSG’s pursuit would depend largely on the implications of their breach of Financial Fair Play Rules.

The Ligue 1 champions have been fined €60 million, though €40m will be returned if the club “significantly limit spending in the transfer market for seasons 2014-15 and 2015-16,” according to the Uefa ruling.

But Al-Khelaifi indicated the fine will not have an impact on the club’s spending.  “The players that I want, I will have,” he said, according to L’Equipe.

And it would surely take something spectacular from the Qatari businessman for Chelsea to even consider parting ways with one of the finest talents in world football.