Paris Saint-Germain president Nasser Al-Khelaifi has ruled out a move for Real Madrid star Angel Di Maria, indicating that the Argentina international is “too expensive” for his club.

The winger has continually being linked with a move away from Madrid this summer and PSG as well as Manchester United have been closely monitoring his situation.

Di Maria’s future was the subject of much speculation last summer, but his starring role in both the Copa del Rey and Champions League final saw him emerge as one of Madrid’s star men in 2013/14.

However, the La Liga side have refused to rule out his departure following the arrival of James Rodriguez, though PSG are now out of the race for his signature. 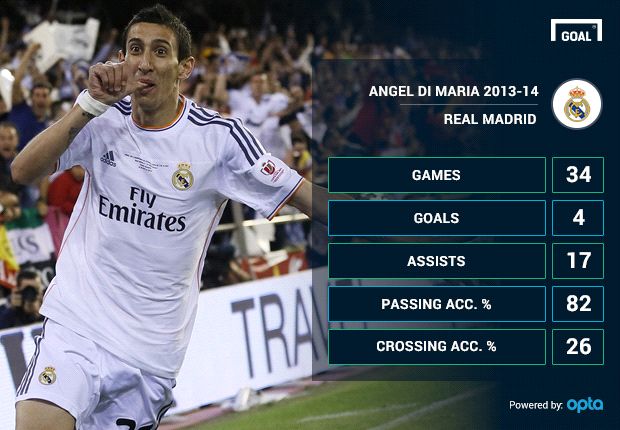 “As for Di Maria, it is true that we have held talks with Real Madrid president Florentino Perez,” Al-Khelaifi said at a press conference.

“But he is too expensive for us. We have stopped negotiations.”

PSG have already secured the services of David Luiz from Chelsea for a fee of €50 million this summer, while they have also signed Serge Aurier on loan until the end of the season.

The Parisians were hit with a €60m fine for breaching Financial Fair Play (FFP) regulations, while their Champions League squad will be reduced to 21 players for 2014-15 as well.

Of PSG’s fine, €40m will be returned to the club if they comply with the measures set by the Club Financial Control Body (CFCB), but the sanction has had a significant impact on their spending so far this summer.

Head coach Laurent Blanc has said on more than one occasion that they are unable to buy the players they want following the FFP penalty and they have now been forced to pull out of the race to sign Di Maria as well.

The 26-year-old has a contract with Real Madrid until June 2018 and an offer in excess of €60 million could be needed to lure him away from the Santiago Bernabeu side.