​Stuck indoors with little respite from lockdown in sight, nothing to talk about and very little to do, in the end, what entertains us most is what other people say or do. That’s the be-all and end-all, so when Marcus Rashford took part in a Q&A, we were blessed with a plethora of talking points.

Currently out injured – not that it matters anyway – the Manchester United forward had a chance to open the floor to his vast array of fans, talking all things football, some things not football, and a few things that involve neither a foot nor a ball.

It was Bleacher Report who were those hosting the show, all done live via their ​Instagram page. As you’d expect, the questions came flooding in for the ​Premier League ace who was happy to discuss all manner of topics in an engaging Q&A.

Starting off with his chosen occupation, ​Rashford opened up on the arrival of Bruno Fernandes – who he is yet to play alongside – and how he’s looking forward to a fruitful on-field relationship with the new signing.

“He’s [Bruno Fernandes] creative and very forward thinking,” he said. “It’s definitely going to be good playing with him. Hopefully we can have some good times together.”

Rashford: “Favourite goal? Probably the free-kick against Chelsea, but the goal that was the biggest was PSG. In the circumstances we were in we knew we had to go there and win.” #mulive [br]

In terms of his idols growing up, the forward struggled to choose one, instead going for two (shock) United legends. He’s a Red Devil himself, so it’s no surprise, and neither were his choices.

“Rooney and Ronaldo,” he unsurprisingly claimed. “Just watching them closely when they were playing, they were young and full of energy. It was a great experience watching them.”

He extended beyond that with his favourite United goal, and no guesses for which one it is, as it happened only back in October and it was pretty darn special. He did caveat that, though, throwing in his ‘biggest’ goal into the mix.

“Favourite goal? Probably the free-kick against Chelsea, but the goal that was the biggest was PSG. In the circumstances we were in we knew we had to go there and win,” he added. 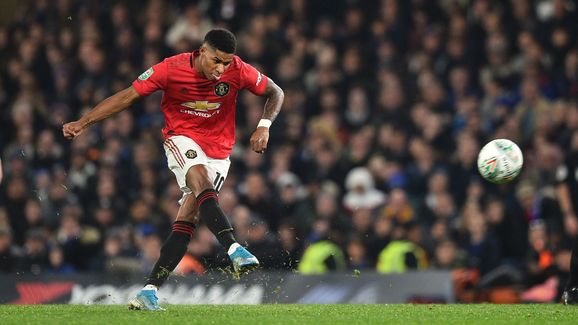 Enough of career goals and idols for now, what about the parts of the game players rarely discuss; y’know, like skill moves? It’s not often spoken about by current stars, but Rashford singled out his favourite trick of the lot. Weirdly, given he’s become known for his ‘flip-flaps’, he opted for something else.

He concluded: “Favourite skill move? I’m a big fan of the step-over. It’s simple but very effective to cross or shoot.”