The festive time of year is upon us, and so we enter into a critical period of the Premier League season. At both ends of the table, and indeed in the hunt for European places, results at this stage of the campaign could play a large part in deciding how the season finishes.

With Manchester United six points clear and key players returning, coming through their festive fixtures unscathed could prove decisive in the title race. Can rivals City keep up the pace?

Will Tottenham, Arsenal or Everton be able to make a break from the chasing pack in the hunt for the fourth Champions League spot? Can Liverpool put a firm foot forward and get some momentum ahead of the January transfer window? Or will West Brom start to pull away with European football in sight after a good start to the season?

Will anyone be cut adrift at the bottom of the Premier League? Who has the most difficult run over the next two weeks? Goal.com casts a critical eye over the upcoming fixtures. 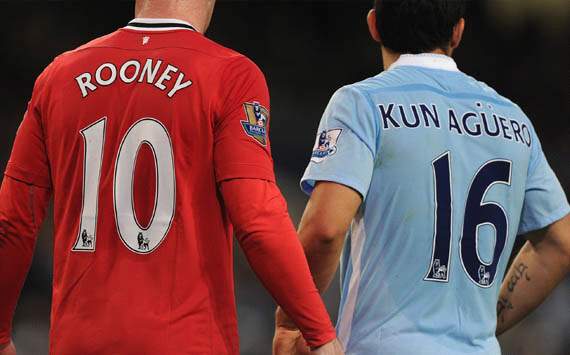 Manchester United go into their run top of the table and face a relatively easy set of fixtures. They host Newcastle and West Brom and travel to Swansea and Wigan.

The toughest games looks to be against the European football-chasing Baggies who, despite a recent dip in form, still occupy seventh – and are level on points with fifth-placed Arsenal. And let us not forget the Wigan beat United 1-0 at the DW Stadium Stadium near the end of last season.

Manchester City, meanwhile, have an arguably easier run with trips to Sunderland and Norwich and the visits of Reading and Stoke City. On paper, all of those fixtures look to be almost nailed on wins – but Chris Hughton’s in-form Canaries could spring a surprise.

It is worth noting that Sunderland were the only side to take four points off City last term, beating them 1-0 at the Stadium of Light over the festive period. But that is just as thick as the plot gets. The champions have the easiest set of fixtures among the title-chasing sides and are this section’s winners

Which leaves Chelsea. Aston Villa and QPR come to Stamford Bridge either side of trips to face Norwich and Everton.

The Rs are unbeaten under new boss Harry Redknapp, with improvement evident in recent weeks, and the same can be said for fellow relegation strugglers Villa – who the Blues lost 3-1 to on New Year’s Day last season.

But the hardest game is the journey to Merseyside to face David Moyes’ sixth-placed Toffees. Chelsea have beaten Everton just once in the past eight league meetings between the two sides, losing two of the last three – and that makes them the losers in this group.

In theory, Tottenham‘s run should be fairly routine, but there are a few puzzles for Andre Villas-Boas to solve. Perhaps his biggest challenge is to get a fresh squad together with trips to Aston Villa and Sunderland in the space of three days.

Stoke have not travelled well this year, winning only one of nine on the road, so should be a little more straightforward, while Reading at home could prove to be a chance to rotate the squad and still pick up three points.

Arsenal look to have a much more favourable run than their north London rivals considering the postponement of their Boxing Day clash with West Ham. While a trip to Wigan has caused problems in the past, they will be high on confidence after their 5-2 victory over Reading on Monday.

Newcastle at home should be routine, with the Magpies suffering from a notoriously poor run in London, and Southampton away is likely to see former Saints duo Theo Walcott and Alex Oxlade-Chamberlain rise to the occasion.

Everton are definitely the losers of this mini-group, facing tough tests throughout the festive period. First up is a trip to Upton Park to face West Ham, before welcoming Wigan at home. Chelsea at Goodison Park is next, and for these three games they will be without arguably their best player Marouane Fellaini following his headbutt on Ryan Shawcross.

After this they face another away game at Newcastle, but with the hosts on a poor run they will be looking for three points with the Belgian available again after suspension.

West Brom had enjoyed a strong start to the season, but are winless in their last four outings – losing three of them – so they will be desperate to get back on track over the festive period. Unfortunately the run is not too straight forward.

Norwich come to town in a game between two of the season’s surprise packages before the capital and Redknapp’s QPR beckon on Boxing Day. Three days later the squad travel back up north to face league leaders United, a team they have not beaten since 2003. Thankfully, they wrap up on New Year’s Day with the visit of notoriously bad travellers Fulham.

But the Baggies’ run is not the worst of the Europa League-chasing teams. That has been handed to Norwich. Aside for the aforementioned trip to the Hawthorns and one to face Sam Allardyce’s sturdy West Ham side, both Chelsea and City come to Carrow Road within three days of each other.

Norwich have never beaten Chelsea in the Premier League era, while their last victory of the current champions was way back in 2001 when they conceded 11 goals in just two league games last season against Roberto Mancini’s men. With lingering doubts of striker Grant Holt’s fitness, this looks like it could be an unhappy Christmas for Hughton and his players.

Swansea, on the other hand, after hosting United on December 23, are facing three teams below them in the standings going into the period: Reading, Fulham and Aston Villa.

Reading already looked doomed with just nine points, and have lost five on the bounce, so Michael Laudrup’s men should have no trouble seeing off the Royals. Villa and Fulham are trickier opposition, with the former improving of late after a troublesome start but the Swans did the double over Martin Jol’s side last season. The Welsh side have the best set of fixtures against their positional rivals.

Finally, Liverpool. After the Reds face the Cottagers on December 22 – a team who did the double over them last season – they must navigate a tricky tie at the Britannia Stadium against Stoke, a corresponding fixture they lost last season.

However, it is more plain sailing from thereon with games against relegation-threatened duo Sunderland and QPR, which fans would expect six points from.

There is a grim reality in the fixture lists for all teams near the bottom. A cliche often spouted is that there are no easy games in the Premier League. That is certainly true for these sides.

One of the teams who will be hoping for maximum from their home games are Reading, with Swansea and West Ham giving a better chance of points than on their travels to Manchester City and Tottenham – though Spurs will go into the game on the back of two trips away.

Harry Redknapp is unbeaten at QPR, and faces a trip to out-of-sorts Newcastle first up, but strikers like Papiss Cisse and Demba Ba always pose a threat.

Next up is a home clash with this year’s surprise package, West Brom, which will be tough to get something from. Another home match against Liverpool (with last year’s 3-2 win still in the minds of fans) is followed by the short journey to face west London rivals Chelsea.

Wigan have some of the toughest fixtures in the league over this period, with Arsenal first up at the DW Stadium. Next, a short journey to European challengers Everton, followed by a fixture against an in-form Aston Villa side boosted by their recent win at Anfield.

Up next is a home game against league leaders Manchester United. Although they did beat the Red Devils at home last year, form against Sir Alex Ferguson’s side over the years would point to that being an anomaly rather than a more permanent changing of fortunes.

Southampton will welcome Sunderland to St Mary’s first of all, before a fairly short trip to London to face Fulham (who will be looking to arrest a recent slump). After that, the Saints head to Stoke a fixture no team really seems to relish, and with a somewhat suspect defence this year, Nigel Adkins’ side could be up against it at the Britannia Stadium.

Things do not get much easier for them either, as they are likely to face a couple of academy graduates in Theo Walcott and Alex Oxlade-Chamberlain back at St Mary’s for the first time competitively with Arsenal.

Martin O’Neill’s Sunderland side have perhaps the worst run of fixtures in the league at this time of year, and it is difficult to see them picking up many points. A win at Southampton will be a must for them.

In a repeat of last year’s New Year’s Day clash, they face Manchester City at home on Boxing Day. The Black Cats did in fact pick up three points in this fixture last year, but while you should not rule out a surprise, it is difficult to see the same result occurring.  After this, they face Tottenham at home and Liverpool away, giving them a run that could easily see them without a point in four heading into the New Year.