With the dust having fallen on a dismal season at Old Trafford, Manchester United have moved swiftly to secure the appointment of Louis van Gaal. With the unfamiliar misery and strife of the David Moyes era consigned firmly to the past, now the focus switches to what the club can expect from the definitive marmite manager, a man who has married controversy with glory in a career littered with as many fall-outs as titles.

Van Gaal’s credentials and pedigree cannot be questioned. Everywhere the Dutchman has gone he has brought success, as seven league titles in three different countries, plus a Champions League victory, attests – as well as an unbeaten World Cup qualification campaign that saw an Oranje squad that had been embarrassed at Euro 2012 book their place in Brazil this summer faster than any other European side.

The weight of Van Gaal’s success, and the mentality he brings to every match, will be vitally important to a United group who seem to have lost the nous, know-how and confidence to win games. Moyes’s greatest failing was that he allowed his own inherent pragmatism to erode the relentless will to win that had been etched into every United player by Ferguson over decades – and at an impossibly fast rate too.

But Van Gaal can return United to a side that naturally assumes superiority, that looks to play with a swagger. Upon joining Bayern Munich, he remarked, “I am who I am: confident, arrogant, dominant, honest, hard-working and innovative.” The qualities of the man are replicated in his teams, but also echo the traits that United sides of the past were noted for. Under Moyes, mediocrity was tolerated. Under Van Gaal, only perfection will do. 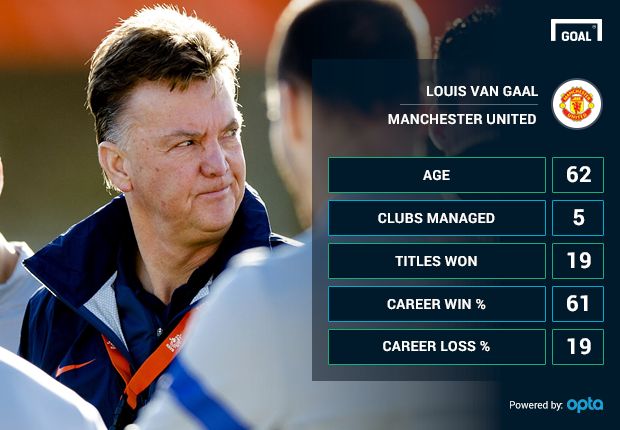 The first task presenting the new manager will be to overhaul the playing squad. The back-line is ageing and primed to leave on free transfers in the summer, there has not been a cerebral hub to the midfield since Paul Scholes hung up his boots, several of the most promising youngsters, such as Paul Pogba, were allowed to escape, and, incredibly, there are only two undisputed first-teamers in the prime age range of 25-28, Messrs Wayne Rooney and Juan Mata.

But even those two players may find themselves victims of a manager who is deeply attached to a philosophy that the players must adapt to, not the other way around. Van Gaal generally plays 4-3-3 (despite experimenting with a 5-3-2 system with Netherlands since Kevin Strootman’s injury), which leaves little room for both Van Persie and Rooney, while Mata would need to reinvent himself as a deeper-lying playmaker.

It already has the makings of a messy dressing-room political saga, and United could risk writing off the two biggest outlays of Moyes’s ill-fated tenure, with Rooney having been handed a bumper new contract. Equally, Van Gaal will look to develop and work with whatever players he has at his disposal: “I’m a coach who wants to – and can – improve players.”

Unquestionably, though, it is a system that has worked incredibly well on the continent and can be credited with laying the foundations of much of Barcelona and Bayern’s recent dominance. It was van Gaal who began Bayern’s transformation towards a possession-dominating outfit and blooded in many of the younger stars now performing key roles, such as Toni Kroos and Thomas Muller, who have both been linked with United.

Even Bayern’s current coach, Pep Guardiola, has been influenced by the Van Gaal way of playing. “My jaw dropped when I saw Van Gaal’s Ajax play,” says the Catalan. “They did everything a football team should do perfectly in my eyes.”

Yet there is a nagging fear that Van Gaal is slightly behind the curve stylistically, which has been highlighted by his protege’s Champions League exit. The merits of the tiki-taka football Bayern and Barcelona play has been re-evaluated in recent weeks as the reactionary, powerful football of Real Madrid and Atletico assumed dominance en route to Lisbon.

That said, Van Gaal is not quite so dogmatically attached to possession football – and even says, if the chance presents itself, that long, direct balls forward are perfectly acceptable, as was the case on Saturday when Robin van Persie volleyed in Jordy Clasie’s raking pass against Ecuador.

Yet how suitable is Van Gaal’s style in the Premier League? English football is defined by its physicality and frenetic turnovers, and there is a clear fervour for frenzied waves of attack rather than patient build-up among British terraces. Brendan Rodgers, for example, quite quickly ditched his attempts to play possession football, and Liverpool’s style is now defined by their speed and directness. How suitable, too, is this United squad to playing the way Van Gaal demands?

There must be reservations, too, as to whether Van Gaal is the right man to hand a €245 million summer warchest to. Would he build a side ripe for English football, and how well would it survive once he is gone?

Ultimately, the biggest fear is that the 62-year-old is too much of a renegade. His ballsy (literally) motivational tactics are well documented, but it is his demeanour in public that matters most. In the past he has been curt, brash and rude, but United – as a brand – need a figurehead that represents certain values. Moyes was too meek, defeatist and beleaguered, while Van Gaal goes almost too far in the opposite direction.

So the imminent appointment of Van Gaal presents an interesting trade off. On the one hand he has the pedigree, conviction and team-building skills United have been starved of, but on the other hand he is volatile and perhaps overly attached to a philosophy that is, at best, no longer in vogue, and, at worst, outdated.

But he presents the lure of a near-instant return to better days, and, even if his tenure ends in flames, as been the case previously, there is a sense that he could achieve a great deal no matter how brief his reign. And, of course, Old Trafford is no stranger to a fiery, temperamental presence in the dugout, and it has never done them any harm before.