We are gathered here today to pay our respects to Robin Dangermouse* van Persie, who tragically passed away at 15.03GMT on Sunday, December 23, 2012.

Van Persie, a professional footballer working for Manchester United Incorporated, was killed by blunt force trauma in a workplace accident at the Liberty Stadium in Swansea.

The Dutchman, 29 years old, fell to the floor and, before he had time to call Claims Direct for compensation on a no-win no-fee basis, was struck by a thick metal brick known to those in his trade as “a football”. He was pronounced dead on the scene.

“It was absolutely horrible,” shift manager Alex Ferguson told MTW. “I saw it all happen and it’s just so difficult to stomach.

“One minute, Robin was fine, the next he was down on the ground with his head caved in. There was barely anything left, just a sloppy mess of meat and bone.

“If you ask me, it wasn’t an accident. Not really, anyway. The whole setup of that office is a death trap. When he came in for work at 13.30GMT they broadcast music at volume so high that I’m surprised his eardrums didn’t cave in on the spot. I can only hope that the ‘days since an accident’ calendar on the wall is ironic.”

Van Persie was well liked by all of his colleagues and “showed real progress for promotion down the line,” according to one company source.

Asked by MTW for a comment on his departed friend, co-worker Jonny Evans, clearly deluded with grief, said: “What are you talking about, mate? Robin’s fine. He got hit in the face by a football; it happens all the time.

“Seriously, he’s just over there having a cuppa.”

*Van Persie does not have a middle name so MTW gave him one. Everyone deserves an awesome middle name. 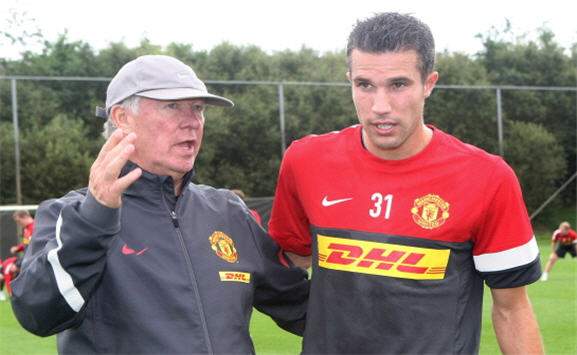 Quote of the weekend

“At one stage, he covered 12 kilometres [in a match] and it was a record for him“

– MTW hopes that Martin Jol gave Dimitar Berbatov a serious dressing-down after running that much. Nobody wants to see that

When you’re a new face at school you often learn the hard way about what to do and what not to do.

Aston Villa, made up as they are of a collection of teenage schoolboys, rocked up at Stamford Bridge Senior School all puffed up. “We beat Liverpool at our last college,” they boasted in squeaky, unbroken voices. Then they looked at David Luiz.

David Luiz is a funny-looking young man with silly hair. Occasionally, he can be clumsy and absent-minded. Giggling at him is understandable – but that doesn’t mean that he’ll accept it.

“DON’T! LAUGH! AT! ME!” the Brazilian bellowed at the suddenly petrified Villa kids. And then he whistled over his buddies from his Remedial Public Relations course for a good old-fashioned session of bullying.

For 90 minutes, Luiz led his cohorts in a masterclass of schoolboy violence. He held Andreas Weimann’s head in the toilet bowl and flushed it. He convinced everyone in the class to start calling Ashley Westwood “Poopybrains”. And he pulled Chris Herd’s pants down right in the middle of the playground.

The Villa players’ mums will hug them tight this week and reassure them that it gets better, that they’ll go on and graduate from some lovely university like Oxford United and everything will be OK. But that won’t be much comfort right now for the poor, spotty, weeping Villans. School is hell.

One last thought before MTW disappears to its bath of eggnog  and worn-out DVD copy of the episode of ‘Chuck’ where the car crashes into the BuyMore: This column would like to issue a holiday appeal to 19 of the 20 clubs in the Premier League.

Stoke City have not finished in the top 10 since they were promoted back into the top flight in 2008. Tony Pulis is not taking it well.

Driven into a deeper obsession every summer with grinding out the most unimaginative, short-term transfers possible “to add that bit of experience”, Pulis has hewn himself a team that currently sit ninth. To do this, the Potters have conceded 13 goals – the lowest in the league – and scored just 15 – the joint-lowest in the league.

It is time for this to stop. MTW cannot take it anymore. To watch a Stoke match is to wish upon yourself physical harm (perhaps playing in a Stoke match would do the trick).

For the love of all that is good and true, this column urges all other Premier League teams to comprehensively and remorselessly fix their games to ensure that the Potters finish in the top 10. Then Pulis can finally wake up from his madness and we can all move on.