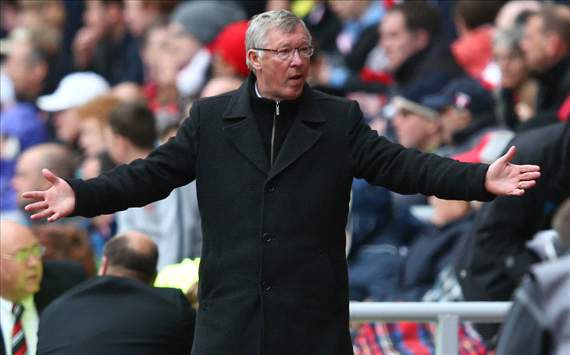 Sir Alex Ferguson believes Manchester United are halfway to reclaiming the Premier League title from rivals Manchester City after a 2-0 win over West Brom cemented their seven-point advantage over the champions.


An own goal from Gareth McAuley and a fine late strike from substitute Robin van Persie saw the Red Devils overcome Steve Clarke’s men at Old Trafford while City won a 4-3 thriller at Norwich.

And the Scot now feels his side are in pole position to win the title – especially as he thinks the squad is as strong as he’s ever had in his time at the club.

“We’re in a good position. We’re halfway there,” he told The Sun.

“I am more than happy with the players I have in my squad and it’s a group as good as any I’ve had in my time at Old Trafford.

“We’ve a game on Tuesday away at Wigan and we’ll look forward to it.”

United managed to keep a rare clean sheet against the Baggies despite a stern aerial test, and the return of captain Nemanja Vidic has handed Sir Alex a big boost.

“They all defended crosses very well – we were competing with all the crosses and did very well,” he continued.

“Credit to West Brom. They had more of the game in the second-half and were a threat with their crosses.”

And the Old Trafford manager also praised striker Robin van Persie for his impact from the bench, sealing the point with a vicious curling shot from the edge of the area in the final minutes.

“Robin changed the game for us. When I brought him and Paul Scholes on they settled the game down,” he continued.

“He’s been fantastic. He’s a fantastic player. He came on and changed the game for us. Every time the ball went to him he kept hold of it and turned on it.”

United are top of the league with 49 points from 20 games despite the clean sheet against West Brom being only their fourth in 20 Premier League games this season, and travel to 16th-placed Wigan on New Year’s Day.